Fertility Treatments & Flash-Freezing: Everything You Need To Know

Fertility Treatments: Healthcare practitioners have been using assisted reproductive technology (ART) to help people start their families since 1981. The earliest ART treatment methods were a major breakthrough in the reproductive health field, and they’ve only become better since the early 2000s.

Infertility treatment is more successful than ever before thanks to technologically improved flash-freezing technologies.

What is the significance of this? (Fertility Treatments)

Here are four significant ways that flash-freezing is gaining traction in fertility and health communities.

Fertility Treatments vs. Slow Freeze Technology: Why They Don’t Mix 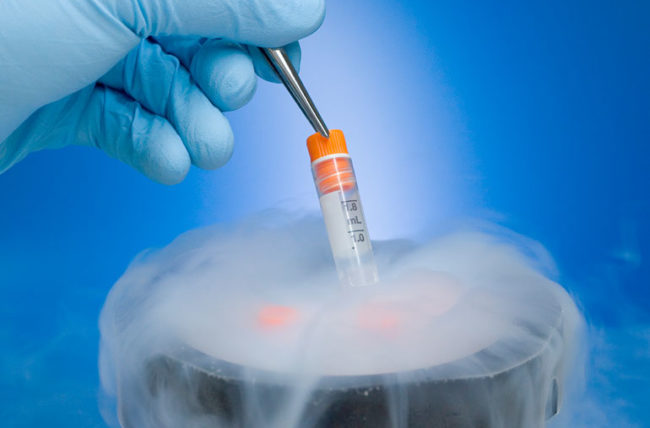 It’s not uncommon for people to believe that all freezing processes produce the same outcomes. After all, if something is frozen, it will stay that way… right?

While surgeons had success with slow freeze technology, also known as controlled rate freezing or equilibrium freezing, in the past, the procedure’s flaws were quickly uncovered.

Slow freezing wasn’t as effective as doctors had hoped in treating infertility, so the search for a trustworthy alternative began. The solution to the problem would come in the form of vitrification, a cutting-edge flash-freezing process.

Vitrified samples are treated with cryoprotectants and then submerged in liquid nitrogen for quick freezing and storage, rather than slowly reducing the temperature of specimens too -320° Fahrenheit as with gradual freezing.

Biological specimens that were frozen using this method not only have a better probability of surviving storage and thawing, but also have a higher rate of implantation than slow-frozen samples.

When it comes to employing vitrification for reproductive concerns, ART procedures aren’t the only way to go about it. The fertility and health communities have benefited from vitrification in four ways.

There’s good chance vitrification was employed to collect and preserve the samples, whether they were collected and stored using one’s own frozen eggs or frozen donor eggs or sperm.

Ice crystals impair the overall cellular structure of stored eggs and sperm, lowering the success rates of those materials. Vitrification protects against these problems and improves the chances of conceiving.

If a patient is experiencing symptoms such as abnormal tissues or unexplained vaginal bleeding, their doctor may recommend cervical surgery to address the issue. Surgeons now employ a cryoprobe, revolutionary flash-freezing equipment, to ease the surgery, as opposed to decades ago.

Various fertility research initiatives rely on having access to the correct types of high-quality specimens. Cryogenic therapy and vitrification, fortunately, have increased the availability of these samples. These studies allow scientists to improve the treatment regimens for those who are trying to start a family.

It’s critical to have consistent supplies of specific medicinal plants to ensure patients can access the meds and supplements they need to cure their infertility. Researchers have discovered new techniques to gather and store these specimens for future use by using flash-freezing protocols.

Infertility and Cryogenic Therapy: A Partnership You Didn’t Know You Needed

When a person or couple has been unsuccessful in their attempts to start a family, they are usually eager to explore practically any treatment option. They may not appreciate, though, how important flash-freezing is in those processes.

While doctors have been effectively treating reproductive difficulties for decades, cryogenic technology is boosting not only available therapies, but also the possibility of conception.

It’s incredible to think that this one technology aspect may be the key to forming the family of one’s dreams for so many people.

PGS is a technique for determining the chromosomal normalcy of embryos. It can tell if an embryo has too many or not enough chromosomes. Because chromosomal abnormalities cause many occurrences of pregnancy loss. This PGS can often aid when a woman has had several unexplained miscarriages. It can also lower the likelihood of producing a child with a major genetic disease.

PGD is a more involved type of genetic testing that looks for specific genetic illnesses. Like Tay Sachs or cystic fibrosis. Also, PGD can provide crucial peace of mind to couples who are carriers of these disorders. And are concerned about passing them on to their offspring.

PGS and PGD may both determine an embryo’s sex, which may allow families to balance their family if they already have one or more children of the same sex.

Photographs are taken throughout time/EmbryoScope

The EmbryoScope, a specialized incubator that shoots time-lapse images of embryos as they develop, is one of the most recent advancements in fertility therapy. This reduces the number of times the embryos must be removed from the safety of the incubator during their growth, as well as their exposure to any potential handling errors or airborne contaminants that could harm them. The passage of time

At a pace of one every five minutes, the Embryoscope captures a photograph of the embryo. The images are combined into a time-lapse film, which allows the embryologist to continuously see and monitor the embryo’s divisions and development while it is kept in the perfect incubator environment. Advanced algorithms and artificial intelligence can be used to spot patterns in the way embryos develop. And the evidence is accumulating that the precise timings of cell divisions to predict the embryo’s viability. All of this allows for the transfer of the best and healthiest embryo possible, resulting in far improved patient results.

Researchers from all across the world are now continuing the quest that began so long ago. IVF and fertility treatment are continuously pushing the boundaries of what is achievable. The goal remains the same: to provide for every person who aspires to be a parent. With the opportunity to hold their healthy, happy kid in their arms.

How to Chromecast Steam Games from Android, iPhone & PC

How to Chromecast Steam Games from Android, iPhone & PC